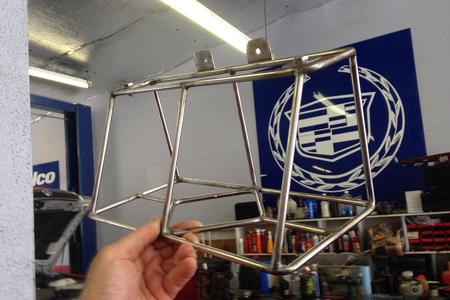 Thanks for the stand.  It is just enough to keep the wing from pinching when I set it down, and gives me just a bump in height while putting it on.  I needed the size in order to maintain the ability to fit in my shipping container while keeping it under 50# for taking trips on planes.  I have to admit it, when I first took it out and inspected it, I thought it wasn’t going to line up (just holding it up and looking, the tolerances looked too tight), but it was precise once I got things disassembled and lined up.  Good welds, good craftsmanship, spot on measurements.  You are the man.

Now all I have to do is loosen the handle and it fits like a glove in container (see pic).  Thanks, man.  Have a great 2018 diving.

In addition to my hand-crafted Dsix originals, I am able to work with individuals in order to produce custom made items to suit their own needs and desires. 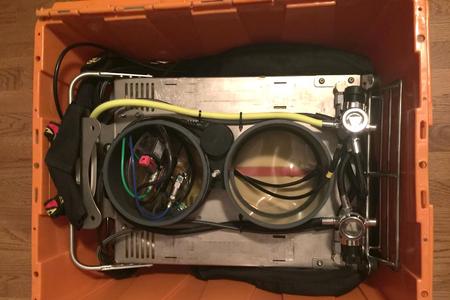 I began by building the first aftermarket stand for my Optima rebreather when I found that the one supplied with the unit was not stable and strong enough to suit me. After several others expressed an interest in having me make one for them, I produced a few more.

I have done the same with a few other items that I have built also.  I have begun to work with both engineers and divers who want custom projects designed and built.  With this, I have expanded into a few more products that I would have never have the opportunity to build.

I just received a new stainless steel stand from Don Six today for my rEvo Micro.

The quality and craftsmanship are first class . The welds are beautiful the bolt holes all lined up with precision and it only took about 5 minutes to install. This thing is so well made I think I can use it for a jack stand for my Hummer if I get a flat tire. I didn't weigh it but it feels like it's less the two pounds if I had to guess. ( Don can supply the specs )

I know we have all read bad stuff about Don over the years and because of the simple fact he hangs around Peter Sotis and Tony Land I will have to assume it's all true ;) ( birds of a feather) but I can tell you he defiantly is a master craftsman and this stand is a piece of artwork and worth every penny I paid for it. :)  I'll post some pictures.